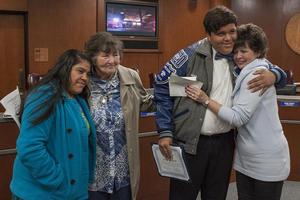 C. E. King High School and Sheldon Early High School junior Josias Delgado was recognized at last night's Sheldon ISD School Board meeting for his act of heroism in helping prevent a catastrophe because he was persistent in helping notify an individual that their house was about to be consumed by a fire that had started at a neighbor’s home next door.

It all happened a few weeks ago after Delgado’s mom had picked him up from work at the Buffalo Wild Wings off of Wallisville Road. As they were driving home, they both noticed some smoke and flames nearby.

Originally, they believed a car was on fire, but after driving closer to the scene they quickly realized a home was on fire – and the home next to that one was taking on intense heat…with its structure beginning to melt. What made matters worse was that they noticed lights on inside the house that was about to be consumed with flames, so they knew immediately that someone must be inside.

By this time, the back of the home was on fire…so Delgado and his mother began knocking on the door – however, it was protected with a steel frame, and they weren’t able to get inside. They both improvised and grabbed rocks and began throwing them at the door to get the homeowner’s attention, while also calling 911.

Luckily, the person inside the home – Ms. Dorris Becvar – finally came to the door, and they were able to exit the home before the flames destroyed that side of the house.

Palmer, also a C. E. King alum, shocked Delgado by presenting him with a $500 scholarship for his act of bravery in helping get her mother out of harm's way. Also, Palmer's sister, Lynn Kennerly and husband Donnell, were in attendance for the presentation.

A little background information about Josias

Josias is currently pursuing his associate’s degree from San Jacinto College’s Pre-Med Studies program. Following high school graduation, he wants to attend Baylor University. He is also an avid tennis player and is a member of the C. E. King Panthers tennis team.